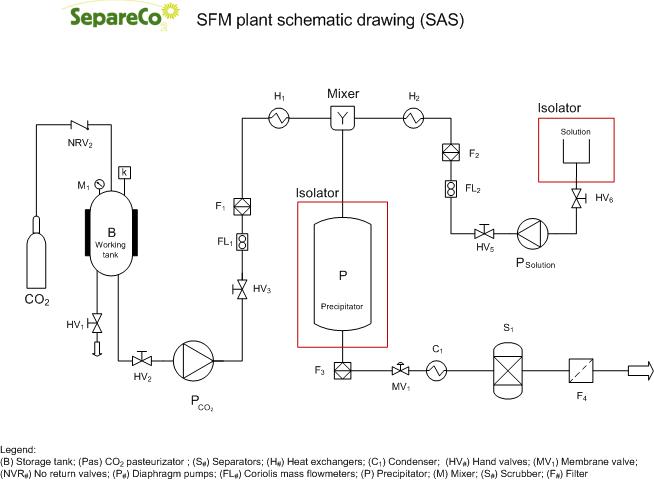 As mentioned previously, the low solubility of a part of pharmaceutical products of interest limits the use of SC-CO2 as a solvent in the mico or nano production of particels. To solve this problem it was decided to use the SC-CO2 as anti-solvent and not as solvent. In this case the solute is insoluble in the anti-solvent, while the anti-solvent must be miscible with the liquid solvent. The process is based on a quite simple concept: when a liquid solution is sufficiently expanded by a gas, the liquid phase is no longer a good solvent for the solute causing the precipitation with formation of particles. SAS (Supercritical Anti Solvent), according to its name, applies the supercritical fluid as an antisolvent. Hence the solute to be micronized has to be quasi non-soluble in the supercritical fluid. This process is structured in a differently way than previous RESS and PGSS. The SCF is first pumped to the top of the high pressure vessel until the system reaches a constant temperature and pressure. Subsequently, active substance solution is sprayed as fine droplets into above SCF bulk phase through an atomization nozzle. The large volume expansion of drug solution in vessel, resulting dissolution of SCF into liquid droplets and, subsequently, in super saturation due to reduction in solvent power leading to nucleation and formation of small and mono disperse particles.

Particles are collected on a filter at the bottom of the vessel. The SCF and organic solvent mixture flow down to a depressurized tank where suitable temperature and pressure condition allow gas-liquid separation. After the collection of sufficient quantity of particles, the spraying of liquid solution has to be stopped. Furthermore, to remove residual solvent, pure SCF continues to flow through the vessel.
There are many variations of this process: