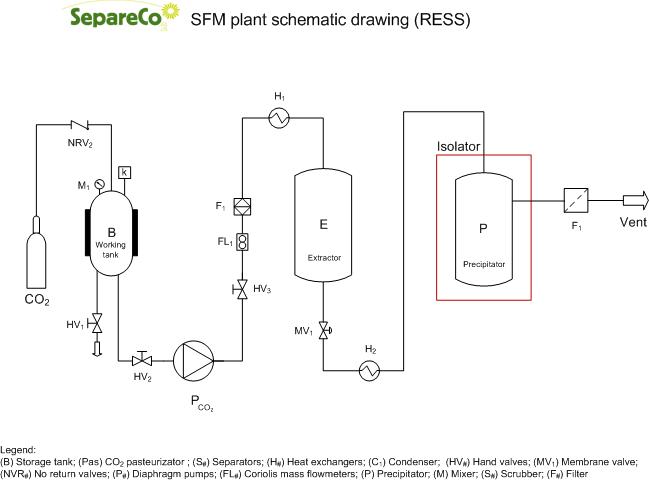 RESS (Rapid Expansion of Supercritical Solution) is used generally to produce fine particles for the food, cosmetic and pharmaceutical industry.
Organic material is dissolved in supercritical carbon dioxide and is used to rapidly expand the supercritical solution through an expansion nozzle. Due to an abrupt decrease of pressure to atmospheric, very high Supersaturation values is achieved which led to small particle sizes. Furthermore, as the pressure change traveled at the speed of sound, a rapid propagating mechanical perturbation is obtained and led to an uniform condition within the nucleating medium, and hence in principle to narrow particle size distributions. Previous RESS reports indicate that the RESS process is an extremely attractive technology to form small particles with a narrow particle size distribution.
RESS process is consisting of two steps:

The SCF percolates and dissolves the solid substance(s) in the extractor and then the resulted solution is depressurized through a heated nozzle or capillary at supersonic speed into a low pressure chamber. The supercritical solution is expanded adiabatically in the chamber, which leads to a rapid drop in temperature and pressure and spontaneous formation of droplets/particles. During the rapid expansion of the supercritical solution, the density and solvent power decrease significantly, resulting in super saturation of the solution and consequently precipitation of desire particles free of a residual solvent.The RESS process advantages are its simplicity, effectiveness and the absence of organic solvents.
There is also a variation of the traditional RESS that uses a solid cosolvent (RESS-SC). This concept is widely used in the field of extraction with SCF and is called co-extraction. Generally, the RESS process is batch type, but there is also a continuous RESS process, which allows to obtain micro-particles in a constant and continuous way.
PrevNear-critical Expansion Atomization
Particles from Gas Saturated SolutionsNext