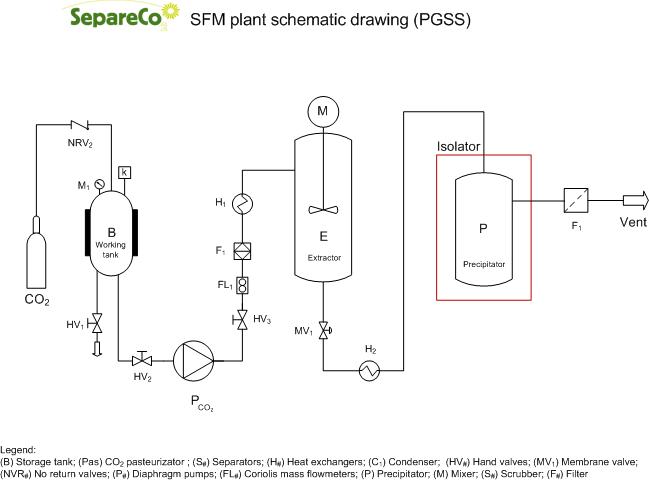 PGSS (Particles from Gas Saturated Solutions) is a technique for the production of microparticles of different materials of relatively low melting temperatures, such as polymers, waxes or fats. The process is based on the capacity of those materials to dissolve large amounts of CO2 at moderate pressures. Upon depressurization down to ambient conditions, the dissolved CO2 is rapidly released and expanded, producing an intense cooling effect that promotes the formation of microparticles.
The PGSS process is quite similar to the RESS process with one important difference: in PGSS process, the polymer(s) are first melted or suspended in solvent at a given temperature in an autoclave and then solubilizing SCF-CO2 in above melted or liquid suspended substance(s), leading to a so called gas saturated solution or suspension that is further depressurized through a nozzle with the formation of droplets or solid particles.
Unlike to RESS technique, the principle governing PGSS process involves both the pressure and temperature and solvent-induced phase separation. This technique avoids the low solubility in SC-CO2 of many molecules of pharmaceutical interest such as proteins and peptides that would be too difficult to treat with RESS.
Advantages of PGSS process are:
PrevRapid Expansion of Supercritical Solution
Supercritical AntiSolvent MicronizationNext